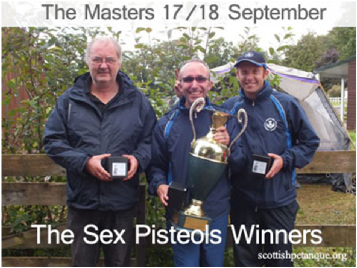 SPA MASTERS 2011 was hosted by Fochabers Petanque Club on their piste next to the Cricket Club in Fochabers over the weekend of the 17th and 18th of September.

A ‘round robin’ format, 6 games were played on Saturday and 5 games on Sunday.

With an unfavourable weather report for the weekend players assembled at the piste on overcast but happily dry Saturday morning and play commenced promptly at 10:00.

Lunch from 1:00 to 2:00 and a sumptuous feast of soup, sausage rolls, sandwiches, scones, cakes, you name it, was provided by Mrs Stronach. And similar fare was repeated on Sunday! Much appreciated Robbie’s mum!

With no official umpire for the weekend teams were asked to solve, as far as possible, their measure situations and this was achieved with very few ‘third party’ requests.

The lure of a place at the World Championships for the winners and only four places at the Celtic Challenge table a dog eat dog competition was anticipated.

The day ended with four teams, Pretty Vacant, Nord Ecosse, Maboules and the Pisteols on 5 wins, followed by Triaxle and Just Us on 4 and 3 wins respectively and the other six teams fighting for the remaining 9 wins.

Sunday morning, overcast and threatening rain, progressed with little change in the overall standings. The afternoon brought rain, but no break in play, with the top five teams from Saturday still in the lead and at the end of the day the Pisteols took first place with 9 wins followed by Nord Ecosse with 8 wins and a 1 point difference over Pretty Vacant also on 8 wins. Triaxle – the new boys on the block, well Robin G is hardly a new boy but Paul and Kevin are – with 6 wins pipped Maboules – old boys and girls! – also on 6 wins by 7 points to claim 4th place.

Team 1 – Pisteols – qualify to represent Scotland at the World Championships 2012.

Teams 1 to 4 qualify to represent Scotland at the Celtic Challenge 2012 in Ireland.

Teams 1 to 8 qualify to represent Scotland at the Home Nations 2012 in Wales.

Thanks to Johnny W and Douglas H for organising the competition and Fochabers Petanque Club members, especially Ma Stronach and her helpers, for their hospitality.