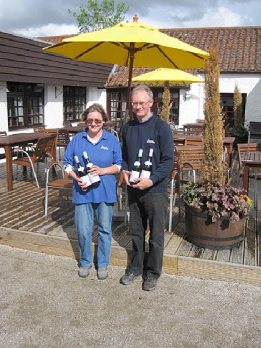 By 9:45 on a late spring Sunday morning that couldn’t make up its mind whether to rain or shine, so it did both, but luckily the latter outshone (get it!) the former to the relief of the motley crew assembled in the Birds and Bees car park. Why do we never learn? The gate to the courtyard is locked on a Sunday morn until any time between 10:00 and 10:15!

After an excellent lunch of soup and sandwiches the top 4 teams from the morning leagues played for the honour of being ‘top team’ of the day.

The remaining 3 teams fought it out for the non existent plate via Bob playing his fiddle!

The above resulted in Ed & Alison coming from behind to beat Judy & Douglas 13-10 to be the “May Day“ pair, with Jimmy & Carol coming third.

Another sociable open competition, regardless of the lack of numbers, was as usual with B & B competitions run immaculately by Bob and enjoyed by all.

There are no upcoming events.