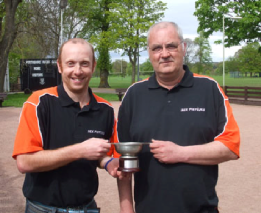 The second Club Open Competition of the 2011 Season was the FENTON QUAICH run by the Perth Petanque Club at the North Inch in Perth.

On a most pleasant spring day only six teams turned up (ten teams last year) – five from Perth and one from Fochabers – Inverleith where were you? mind you it was Easter Sunday after all and perhaps the Capital players were at their devotions.

Six teams so a league of six – doh – what other format! The teams were –

Opening round – Wee Twa fannied UZ , second round – Wee Twa were fannied by Ham and Edds – “Well that’s our points difference back to zero!” commented Mabel. For the second year running the “fannied” were excused the embarrassment of kissing the Fanny due, yet again, to the forgetfulness of the organiser.

FASCH sailed through the day undefeated although they did find themselves under the cosh against UZ at 11-2 down but pulled out the stops, or did John Watson run out of banter, to win 13-11.

So the result was as follows –

Thanks to all for coming to support Perth Petanque and making it a good day of petanque regardless of the low turnout.

Next weekend the SPA and Troon Petanque Club host the Home Nations and we extend a welcome our Irish and Welsh visitors and both Scottish teams and look forward to a ‘home’ victory!