Sincerest apologies for the late publication of the results from Grand Prix 3.

20 teams competed in the final Grand Prix of the season at Inverleith PC on 9th June. With the Grand Prix Series being very close, there was a lot at stake.

After the 6 matches, the winners of GP3 were Pretty Vacant (Shirley Legge, Derek Adam and Robbie Stronach) which was also enough to secure the Grand Prix Series. Live Wires (Marian MacIntyre, Donnie MacIntyre and Charlie Rennie) were second and also secured the silver medal in the series. Les Champignons (Dani Cassini, Mags Montgomery and Colin Montgomery) were third.

The top 12 teams in the Series have qualified for the SPA Masters in September, with places at the 2020 Home Nations and other international competitions up for grabs.

Many thanks to Carnoustie Petanque Club for pointing us to this brilliant article about them in the Courier. We hope it generates a lot of interest and more members at the club. Keep up the good work!

This new competition will be held at Perth Petanque Club on 24 and 25 August. A communication has been issued today to each of our affiliated clubs.

If you want your club to be involved speak to your club’s secretary or contact us via the usual channels.

Sunday 19 May saw the GP series head to the wilds of the North, where 18 teams battled it out on the challenging Fochabers terrain.

No teams were able to make it a clean sweep however three teams finished on 5 wins out of 6. With Les Cremants taking first place, 3 Bears finishing second and Pi claiming the bronze medal.

Going into the final Grand Prix of the series at Inverleith on the 9th of June, the series title is still very much wide open.

Due to daylight and pistes available, only the first 12 teams to register can be accepted. Entries received after the first 12 will be notified by telephone and fee returned.

Entries stating name of team, contact name and telephone number, together with entry fee of £10 per team, should be sent to Harry Ritchie, 18 Burnside Street, Carnoustie, DD7 7EU by Wednesday 26th June 2019 with cheques/money orders payable to R.A.Ripley 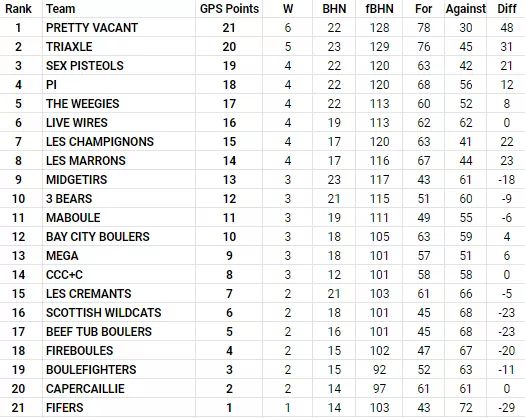 The SPA has adopted an Equality & Diversity Policy which can be found here.  Members are asked to read it carefully. If you have any questions about the policy please contact us through the usual channels.

On Sunday 31st March, 41 players entered our friendly precursor to the season at Perth Petanque Club.  Thank you to all who supported the event, despite the clash with Mother’s Day and losing an hour’s sleep.

Perth PC treated us to bacon rolls and coffee before the action kicked off on a cold, by dry day.  The players were sorted at random into triples with the odd pair in each of the five rounds.

Top of the pile after the last round was Malcolm McKenzie, Douglas Hamilton was second and Paul Fletcher was third.  The final standings for all players can be found here.

Next up is the EuroCup Qualifier to be contested by Perth PC and Inverleith PC at Carnoustie on 7 April, followed by the first Grand Prix of the season at Perth on 28 April.

Finally, a quick reminder that we are selling SPA branded jacks in 4 colours (white, blue, purple and pink) for £2.50 each.  You can pick some up at SPA competitions while stocks last, but if you aren’t able to get to a competition and want some, you can email Colin Stewart colinstewart1976@gmail.com who will sort you out.

The South of Scotland Pétanque League begins once more in April, now expanded to include 7 SPA affiliated clubs:

Each club will play 3 home and 3 away matches over the summer to determine 2019’s champions.

Good luck to all!