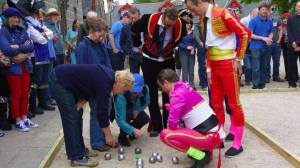 SPA President Colin Stewart attended Monymusk Boules Masters competition on 8th June having accepted an invitation to act as time keeper and arbitrator.  30 teams of 4 players pre-registered to play in the charity event.  12 pistes were erected in the village square (and dismantled within minutes of the end of the event) by a squad of burly volunteers.

With musical entertainment (accordion player and a jazz band), bunting, French food and wine, an enormous raffle and cake stall the event was a roaring success.  The boules became more competitive as the day went on, timed qualifiers in the morning and knock-outs in the afternoon.  Many players were new to the game, with a sprinkling of the odd team with a bit more experience.   And the fancy dress!  Where else would you find matadors, Musketeers, Napoleon Bonaparte and extras from Les Mis in the same place at once, not to mention the countless berets, striped mariner t-shirts and strings of garlic!

Well done to all involved for their meticulous planning, organisation and enthusiasm.  The event raised cash for local charities and the talk was soon about doing it ‘bigger and better’ next year.  We hope so.

You can see the results and more details here: Monymusk Boules Masters website 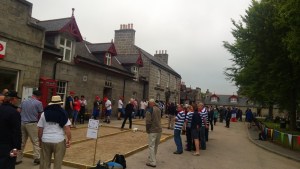