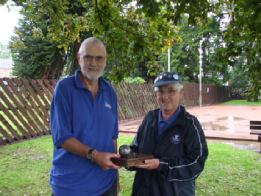 The Weather people had forecast rain for Perth. The folks of Inverleith had predicted rain for Perth. As only the members from Perth were in attendance, it looks like the rest of Scotland had decided it would rain on Perth. Unfortunately, everyone was right and it rained during the Frank Malcolm Memorial Trophy event held at the Perth piste on Sunday 7th August. However, twelve members from Perth donned their waterproofs (well most of us) and played Petanque despite the weather.

Prior to starting the event we cleared some of the flood waters from the piste to allow the games to be played. We played a pairs melee with three games in the morning before breaking for lunch. With puddles in evidence it wasn’t long before the youngster of the club (Finlay Ross) had the old timers splashing about in the puddles much to his delight. When it came to shooting, it is amazing how clear of people the head is when the boule to be hit is sitting in the middle of a puddle.

A number of people were in contention by the time we reached lunch and the rain continued to persist. So a welcome respite to the clubhouse to dry off a bit and get some lunch was in order. Suitably replenished the Chairman suggested playing another round after lunch then a democratic decision would be made whether to continue. After the fourth round was complete the majority of players decided that they were suitably soaked and the competition was brought to a finish. Despite the rain there were some good matches being played and an excellent camaraderie within the competition.

The final results were worked out and Finlay Ross was pipped by Douglas Hamilton. Both with 4 wins, but Douglas claiming the Trophy with a +26 to Finlay’s +17 points difference.

Naturally, as we were locking up the rain decided to abate, but then who can really predict our wonderful Scottish weather.

Our thanks to the members of Perth who managed to come along to the event and to the helpers who prepared the bacon rolls and got the piste into a playable state.